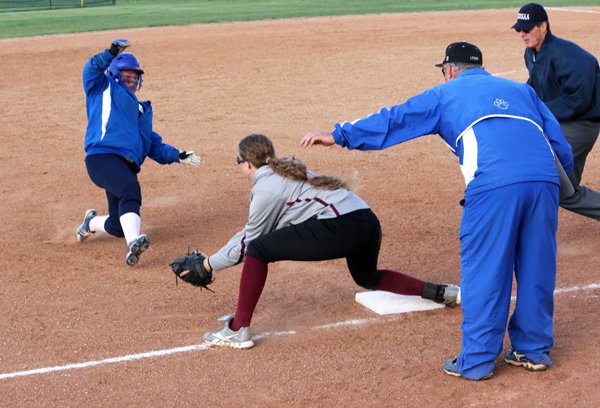 The Hillsboro softball team capped the regular season with a doubleheader sweep of Lyons last Tuesday at the Sports Complex.

The Trojans prevailed in a 3-1 pitching duel in the opener, then dominated the nightcap with a 9-3 win. With the sweep, the Trojans will enter post-season play with an 18-2 record while Lyons will boast a 12-6 mark.

In the first game, Hills?boro?s Julie Sinclair and Lyons? Aubrey Hollinger limited the two teams to a total of 10 hits.

Danae Bina used two singles to score the first two runs of the game. In the bottom of the first, she advanced on a Lyons error and scored on a bunt single by Madison Klein.

In the third, she singled with two outs, stole a base and scored on a Lyons error on a hard-hit ball by Klein.

Hillsboro went up 3-0 in the sixth on consecutive singles by Klein, Bradli Nowak and Emily Jost.

?Danae?s base running and Madison?s hitting were key for us in Game 1,? coach Stephanie Sinclair said.

Lyons scored its only run in the top of the seventh when they touched Julie Sinclair (10-0) for two of their four hits, plus a Trojan error.

The junior left-hander continued her dominant pitching of late, striking out 14 of the 26 batters she faced?another career high. She has recorded 41 strikeouts over her last four starts.

A different Lyons pitcher set the stage for a different story line in Game 2.

After scoring one run in each of the first two innings, the Trojans broke the game open with a four-run third inning, fueled by singles from Klein and Weber and two walks issued by Lyons pitcher Laura Pineda.

Hollinger relieved Pineda after Hills?boro scored one run and had the bases loaded. She struck out the first batter she faced, but a wild pitch followed by a single from Kennedy Lucero brought home the remaining three runs.

?Madison got us going in that inning and it just spurred several hits among the walks,? Coach Sinclair said. ?When we get a team down, the girls just don?t let up.?

Lucero was part of a key defensive play in the next inning. When Lyons? Mor?gan Michaelis ripped a drive into the right field gap, Lucero tracked down the ball near the fence, fired it to Nowak at second base, who then threw to third baseman Shannon Heiser to nail Michaelis as she tried to stretch a double into a triple.

?That is all they talked about for the rest of the game,? Coach Sinclair said of her players.

In firm control, the Trojans added three insurance runs in the sixth on singles by Bina, Klein, Nowak, Sinclair and Heiser.

The two wins secured a second-place finish in the Central Kansas League for Hillsboro at 16-2 behind Pratt at 17-1 (17-3 overall).

Regionals?Hillsboro entered regional play as the clear favorite in the six-team field at Moundridge.

With a bye in Monday?s first round, the Trojans were to play the winner of No. 4 Sterling (10-10) versus No. 5 Little River (4-8) Tuesday afternoon in the semifinals.

Hillsboro will be seeking its first state appearance ever in Class 2-1A, but its fifth trip to a state tournament in six years under Sinclair?s tutelage.

Melissa Garcia and Toby Whiteside were married April 14 at the Harvey County Court?house in Newton with Judge Walker presiding.