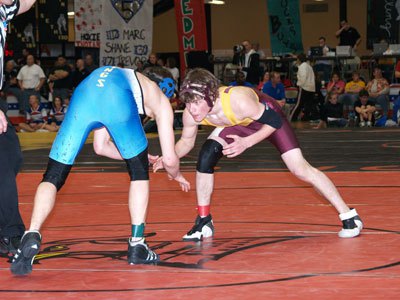 Hillsboro?s Darren Mueller (right) squares off against Dustin Asbury of Central Heights during a consolation-round match at the Class 3-2-1A state wrestling tournament in Hays Friday and Saturday. Mueller won this match, 6-2, and went 1-2 for the tournament. He was on of six

wrestlers from Marion County schools competing. Also in the mix were Mueller?s teammates from Hillsboro, Justin King, Aaron Bina and Dylan Delk, while Marion was represented by Randy Regnier and Brody Carroll, who placed fifth in his weight class. For more information, see Sports, Page 1B.