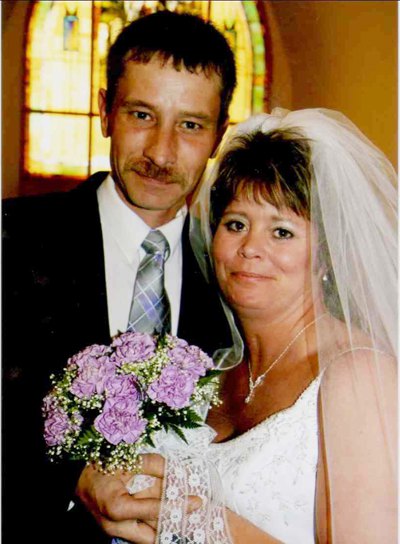 Mariana Redden was in charge of the music and Alice Waner was the videographer.

The bride is the daughter of Charles K. and Pattie Lee Dowell of Canton. The groom is the son of Kenneth Lindteigen of McPherson and the late Deanna Lindteigen.

Escorted by her father, the bride wore a white satin gown with a beaded overlay, spaghetti straps and chapel length train.  The veil was cathedral length with white satin piping.

The bride carried a cluster bouquet of lavender carnations accented with baby?s breath and lace ribbons.

Matron of honor was Heather Burch, sister of the bride. Vickie Tripp, sister-in-law of the groom, was the bridesmaid. They wore complementing satin lavender dresses and carried cluster bouquets of lavender carnations similar to the bride?s.

Best man for his brother was Mike Tripp. Marion Mendenhall, friend of the couple, was the groomsman.

Ushers were Cameron Webster, son of the bride, and Devin Williams, nephew of the bride. Ring bearer was Tyler Dingman, friend of the couple, and flower girl was Alexa Burch, niece of the bride.

Gift table attendants were Danielle Bair, niece of the bride, and Tiffany Wedel and Kaisha Freeman, friends of the couple.  Gloria Hartman, friend of the couple, attended the guest book.

A reception hosted by Mr. and Mrs. Mike Boesker and Mr. and Mrs. Basil Pepperd was held at the Canton American Legion following the ceremony. The bride?s colors of lavender, black and white set the theme for the table decorations.

The bride is a graduate of McPherson High School and Academy of Hair Design in Salina. She is an aesthetician at Trendsetters Salon in Canton and is a custodian for Canton-Galva USD No. 419.

The groom is a graduate of Canton-Galva High School and Salina Area Vo-Tech School.  He is a truck driver and mechanic for Malm Construction in Lindsborg.

The couple will take a wedding trip in the near future to Orlando, Fla. They are at home in Canton.