With this year marking the 200th anniversary of the Santa Fe Trail, it is hard to imagine Kansas as the first settlers crossed the Great Plains, 400,000 square miles of prairie: The Great American Desert.

Each organization specializes in conservation, wildlife and rehabilitation of one of the most iconic symbols of American identity and rugged individualism.

Today, just four percent of what was hundreds of millions of acres of tallgrass prairie remains, primarily in the Flint Hills of Kansas.

An 11,000-acre national preserve, Heather Brown, chief of interpretation and visitor services, said Tallgrass Prairie Reserve is one of the few remaining places anywhere in the world people can observe undisturbed prairie.

With 40 miles of hiking trails weaving through the preserve, “The prairie is very therapeutic. You’re out there and can clear your mind. Nature has a great way of getting you back to where you need to be mentally and even physically,” she said.

With trails that are open year-round, Tallgrass gives hikers a new way to see the grasslands up close and during all seasons. 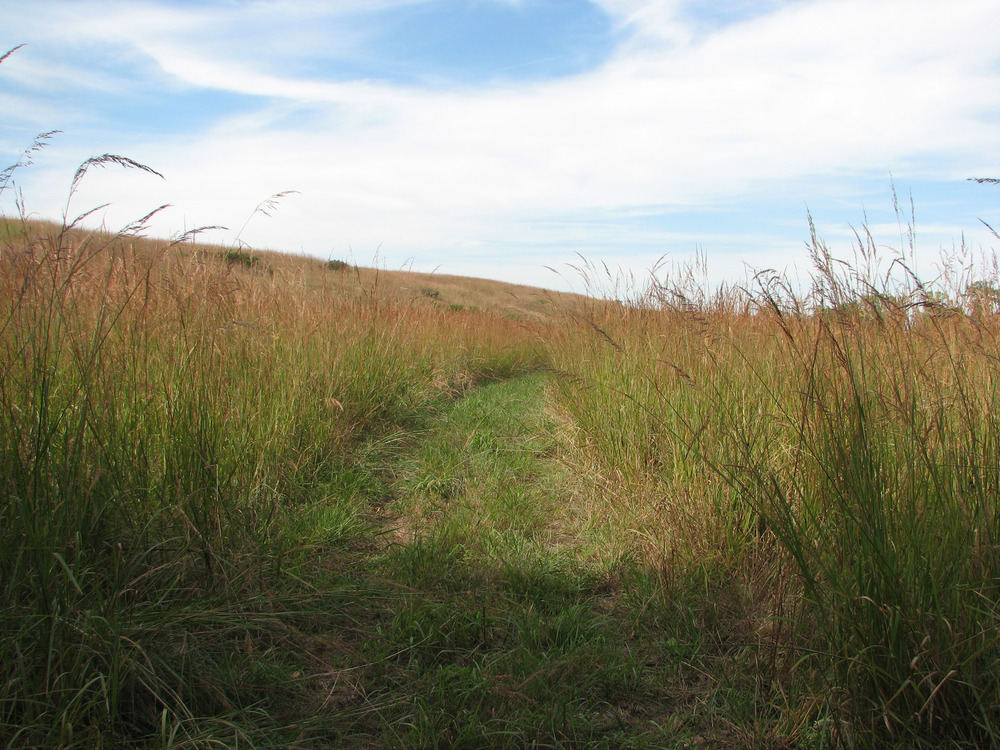 The trails around the property follow the old ranching roads and are mowed regularly. A gravel road leads to the scenic overlook, the highest point on the preserve and popular with visitors.

At Tallgrass, “there are some really beautiful spots” that allow hikers to enjoy nature “and get away from the four walls of their house.” At times, along the scenic overlook route, “there are so many people hiking on the trail, it looks like a little highway of people,” Brown said.

However, with thousands of acres of ground and miles of trail, there are plenty of opportunities to get away from civilization.

“On the east side, it is more off the beaten path. There are places down in Red House and Crusher Hills Pastures that are away from everyone else. It’s really what you have time for and what you want to experience,” Brown said.

The prairie experience is not limited to those in hiking condition.

“We’re working on paving the Bottom Land nature trail as a handicap accessible trail because of its flat nature,” Brown said. “We’re paving that this year.”

Brown added, the hiking trails at Tallgrass are limited to human foot traffic, with no packing or motor vehicles allowed.

There is, however, limited access for hikers who want to experience nature with canine companions. However, all dogs must be leashed at all times and only allowed in pet-friendly areas.

“We are trying to preserve wildlife. We do have areas that are pet-friendly next to Fox Creek. You can have leashed dogs. When we don’t have cattle on the far east side, we have two full sections available for hiking with dogs,” Brown said.

Thanks to an old-fashioned mapping system, visitors can always know where they are on the reserve. A numbered limestone cube is placed at each trail intersection. Each block corresponds with a place on the map, which is available both digitally and on paper.

“If they have to go off-trail to get around bison, they know where they are. Having those limestone blocks reduces the number of people getting lost. That’s a good feature we have out here,” Brown said.

Through the reserve, Brown said there is not only the conservation of grasslands but also a culture.

“We have most of the original buildings. The historic home is under major rehabilitation and opening mid-summer, if not earlier. The historic ranch buildings are part of the story. The barn and chicken house are open, and you can peek through the windows of the schoolhouse, which will open again May 1.

Prior to pandemic-forced closures, Tallgrass hosted a number of annual events to engage the public with the prairie—from butterfly counts to historic haying, birding programs and cultural education.

“There’s something for everyone,” Brown said.

Maxwell Wildlife Refuge: From bison to bacteria, prairies a wealth of biodiversity

In 1951, Maxwell Wildlife Reserve was established by the sons of pioneers on family land for the purpose of preserving the historic prairie; by 1952, the first bison were introduced to the property. Today, 160 head of bison and 90 elk, along with scores of other native species, cohabitate on 2,600 acres of virgin prairie. 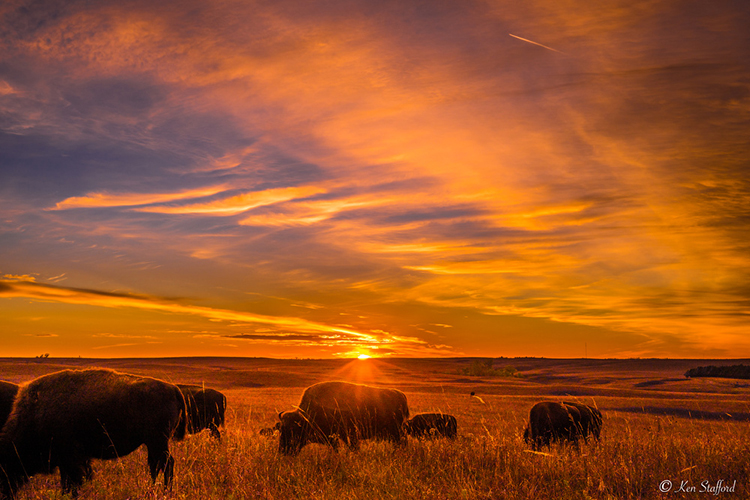 Ken Stafford, a member of the Friends of Maxwell Board of Directors, said visitors have come from all seven continents—including Antarctica—to see these prairie giants in their natural environment.

Before the extermination campaign of the mid-1800s, 50 million head of bison roamed the Great Plains. By 1888, the animals were all but extinct. Elk, now considered an icon of the Rockies, also roamed the plains but were pushed westward with the expansion of America. Today, both animals attract tourists, photographers and school groups to the Maxwell reserve.

While bison and elk are major draws, Cliff Peterson, refuge manager who has lived on the property for over 36 years, said, from springs with ferns to prickly pear cactus and yucca, “there’s a wide spectrum of micro-habitats on the area.”

Through the decades, Peterson has seen ebbs and flows of biodiversity. A dry spell in the mid-1990s brought an influx of mule deer, which vanished when the rains returned.

Stafford added antelope were introduced to Maxwell “more than once.” However, as short-grass prairie animals, the mixed grass prairie was not conducive to antelope, which were picked off by predators.

“There’s all kinds of small rodents, snakes, lizards, skinks, frogs in the wet areas. There’s all the common mammals—cotton tails, fox, squirrels, possums, skunks, bobcats, beaver—that live in the draws and made dams. I’ve seen about everything but a mountain lion,” Peterson said.

Stafford said the biomass of the prairie is unappreciated, mostly because it is underfoot, with prairie grass root systems that run yards deep into the soil.

“Scientifically, the biomass of the prairie is greater than the rainforest. There are several times the biomass that is underground—the animals and the bacteria that creates fertilizers, carbon, oxygen. The great prairie was an incredible part of oxygen production in the world,” Stafford said.

Peterson said bison are essential to the health of the prairie in unexpected ways. Bison wallows, he said, create essential habitats for leopard frogs, which are preyed on by birds and snakes. Peterson said places like Maxwell are essential for preserving not just the charismatic megafauna of the plains but also the smallest indigenous animals—butterflies whose habitat has been destroyed by herbicides and pesticides.

“There are some insects people will never see during the day,” Peterson said, adding entomologists have studied the prairies. “There’s some weird-looking bugs; they are cool looking, but you’ll never see them during the day.”

Stafford said visitors to Maxwell can experience virgin prairie and all of its biodiversity—without barriers or cages.

“It’s quite amazing for people to just stand on those hills and imagine what it was like for a settler coming across the Santa Fe trail, which runs just south of the property. To me, the history, people don’t understand where they came from and what it took to build this country,” he said.

As a decades-long resident of Maxwell, Peterson said, “We hope to always keep it here as a well-maintained and conserved prairie; that’s what the Maxwells wanted. Hopefully our climate won’t change too much and totally change what we can grow in the area, as far as global warming and shifting moisture patterns. Hopefully it will remain a prairie as far as we can see into the future.”

Nearly 20 years ago, Brad Guhr was hired at Dyck Arboretum to rehabilitate acreage used as cropland for decades to a vibrant native landscape.

“We wanted to create a place to allow visitors to experience a landscape different than horticulturally-managed native plant gardens,” Guhr said.

Before a single seed was sown, the Prairie Window Project started with bulldozers, recontouring the land to “give visitors the feeling of immersing into the native prairie ecosystem,” Guhr said.

The project was not simply another garden space for the arboretum but an homage to how powerful an influence the prairie had on the settlement of the United States and its continued importance.

“Multiple generations before us were connected intimately to the prairie landscape for food and culture. Our Kansas economy is built heavily on grain agriculture and beef production, thanks to the rich prairie soil legacy and remaining prairies, respectively,” he said.

As farmers learned during the devastating Dust Bowl of the 1930s, after decades of unfettered cultivation, the native plants of the prairies were essential for erosion control, as well as filtering water underground and in streams.

“It is easy for people to forget about the benefits of prairie today when we live in comfortable homes, buy our food from a grocery store, and drink our water from a faucet,” Guhr said.

In restoring acres of prairie, six years was dedicated to research and sourcing native plant specimens.

“We networked with more than 100 prairie landowners within a 60-mile radius, researched the composition of plants, birds and butterflies on their remnant prairie parcels, did lots of landowner education, assisted landowners with prairie management, collected seed, developed seed mixes, and planted segments of prairie” from the years 2004 to 2010.

When planting began, Guhr said approximately 130 species of wildflowers, grasses, sedges and shrubs were planted in the reconstructed prairie.

Maintaining the reconstructed prairie means mimicking massive forces of nature, from lighting-strike wildfires to herds of bison grazing down swaths of land.

“We simulate these management elements with prescribed burns and a mower, each implemented at least once every three years,” Guhr said.

For residents wanting to restore pieces of native Kansas, large swaths of land are not necessary. Prairie pocket gardens can be planted even in corners of well-manicured lawns.

“People can establish pockets of prairies in their own landscapes with the use of seeds—if they don’t mind waiting years for results—or with plants for more immediate results,” he said.

Native plants, Guhr added, can be sourced twice a year in the spring and fall from the arboretum.

“The prairie ecosystem benefits of sequestering carbon, building and holding soil, water filtration, attracting a diversity of wildlife, and enhancing aesthetic beauty can all be created in micro ways by landscaping with native plants,” he said.

After a seven-hour budget workshop last weekend, the Marion City Council at…